Space Agency 2138 has been released for Android and iOS!  This is the sequel to the original Space Agency game by Nooleus. 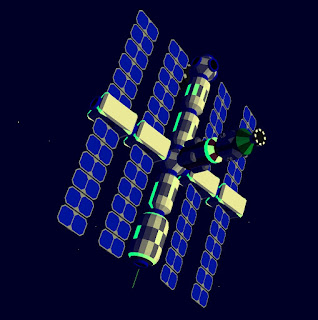 Big changes in game play from the previous version include:

The game had a kind of zombie thriller feel when I first started playing it.  Not everything is explained in the tutorials.  I'm wandering around these space stations that came pre-made in the sand box trying to figure out how things work.  There are also containers floating around which makes it feel like some sort accident happened.  Add in the dark lighting and it can get kinda spooky.  After figuring out how things work and adjusting some of the lighting the spooky feel wore off.


My 2d piloting skills didn't provide much help in 3d.  Adding the 3rd dimension doubles the number of RCS controls.  Docking takes me much longer.  While it may appear the vehicle is lined up from one viewpoint, it may be misaligned from another direction.  I have to stop right before the docking port and re-adjust before giving the final RCS forward thrust to dock now.

The game did have more of a micro-management feel to it than the original.  Alerts pop up to let you know when a part breaks or when a supply is running low.  In some ways this keeps the game more interesting compared to the original.  In the original once you had a station built there wasn't much work do to do maintain it.  Now you have these mini-missions to that will keep coming up to complete. However it can be annoying when you are having an intense piloting session trying to dock two parts and you get a pop up that your botanist is thirsty.

The original game was not set up to build bases on planets (even though we tried really hard to).  2138 makes base building part of the game.  The ground is divided up into a grid and you can construct different building types in the square.  You also need to build a power source and hook the buildings.

The fact that you can customize the layout of your base opens up lots of possibilities.  I'm looking forward to seeing some creative base designs!

One of the most requested features in the original Space Agency game has finally arrived.  Astronauts come in four types:  commander, pilot, engineer, and botanist.  You have to choose wisely the type of astronaut you send on a mission because not every astronaut can perform every function.

Commander is the super astronaut that can do everything.  They also cost the most to hire.  Engineers let you turn on and off power to parts.  Pilots let you control space craft.  Botanists maintain the plants in the hydroponics module.  For example, a pilot cannot turn on the gyroscopes in a vehicle.  Only an engineer or command can do that.

Astronauts have stats that you must manage: nutrition, hydration, blood oxygen, fatigue, and radiation.  If you are not careful the astronaut could die.  Unlike the original Space Agency you need the astronauts to operate the space stations.  You can't operate something if there isn't an astronaut on board.

There are a number of smaller features that will be very exciting for players looking to create their own universes or sandboxes missions to share with others.  (Although there is not currently a share feature, this may be in a future release).

This release has some major game play changes from the previous game.  Nooleus has set this up game to have lots of possible directions to expand in. I'm looking forward to future updates.