The Fall of the Solar Outposts

Solar Outpost 1 & 2 were two ill-fated stations located near the Sun.   They were designed to operate as a pair.

Solar Outpost 1 (SU1) was located very close to the sun to study the solar radiation.  Due to the close proximity to the sun, it would be difficult to cool a  large self supporting station.  Instead a smaller station was designed that required regular replenishment of 02 and C02 scrubbers.  A sister station, Solar Outpost 2,  was constructed to resupply SU1.  Solar Outpost 2 (SU2) was located further from the sun where cooling was not a problem.

The transfer of supplies between SU1 and SU2 was originally intended to be done through a precise alignment of the two stations.  The ATV transfer vehicle would use the momentum from undocking from one station to carry it across the 100 unit distance to the other station.  Because the two stations were precisely aligned, no fuel would be required to re-orient the ATV or to accelerate or break it.

Unfortunately, maintaining this precise alignment proved difficult.  Several times the ATV missed the docking connection and knocked the station even further out of alignment.  Procedures were then changed to manually pilot the ATV shuttle between the stations instead of relying on an unattended transfer.  This caused concern as the fuel supplies began to run down faster than planned.

However it was not the lack of fuel, but a gravity fluctation, that struck the fatal blow to this pair of stations.  Solar Outpost 1 was positioned very close to the sun, its science module inside the circle of influence, while the living quarters and radiators kept the station anchored just outside of the sun's orbit.  A a gravity fluctuation caused SU1 to be tugged slightly closer to the sun and out of its stable location.  Being a minimal station, SU1 did not have any propulsion modules.

The ATV shuttle was immediately launched from SU2 to try to bring SU1 back to a stable location. It was not able to  reach SU1 before it was pulled into the sun's orbit.  The ATV shuttle was already low on fuel because of the change in docking procedures.  The shuttle did not have enough fuel to exit the sun's orbit.  The crew was forced to abort their mission and watch helplessly as SU1 and the two scientist on board fell into the sun.

The destruction of SU1 led the the eventual abandonment of SU2 since the two stations were designed to work as a pair. 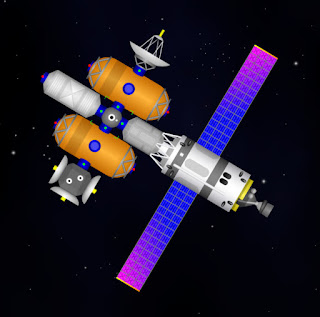 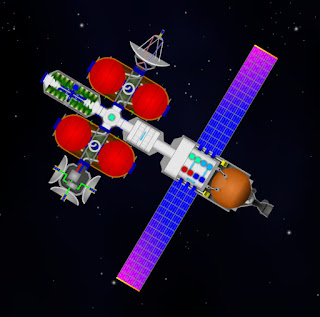 Rescue One is an unmanned ship designed to provide fuel, oxygen and power to other ships in an emergency.  It is automatically locks onto a distress beacon and travels to its location.

When Rescue One arrives at the location of the emergency, it can automatically dock with the vessel in distress to provide power and atmosphere.  The two station refuel silos can also be used to refuel stranded ships with enough fuel to return home.

The solar panels on the stand-alone laboratory combined with the batteries inside, provide enough power to recharge other ship's batteries.  The oxygen garden keeps the atmosphere fresh inside Rescue One and also can replenish other ship's CO2 scrubber and oxygen.

Rescue One is currently stationed in orbit around EMA, ready to provide support to any long range missions. 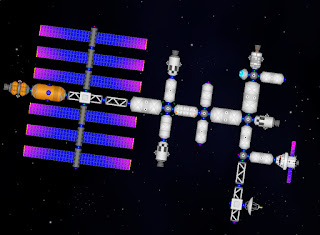 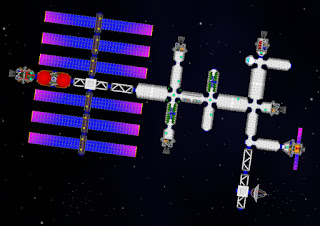 The communication arm with the Voyager X antenna, and the two main docking ports point toward the home planet.  This enables easy docking with resupply ships and a constant communication link.

The back side of the station contains the solar arrays and the fuel storage tank.  It is also the docking point for the station's tug.

Resupply modules serve as station keeping engines.  They are balanced along the station's center line to enable for easy adjustments.  Keeping a station in balance was one of the lessons learned during the construction of this station.


After Nooleus nerfed the SLS  Core in the 1.6 update, Centauri Spaceworks was forced to find another launch vehicle for heavy payloads.  Enter the Proton V.  It is a two stage rocket that combines the first stage of a Saturn V with the second stage of a Proton rocket.

It has enough power to launch a hub and a station module at once.  It can easily handle any single payload.  The roar of the Saturn V makes it a blast to launch. 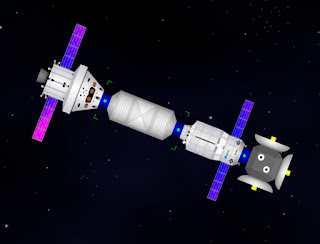 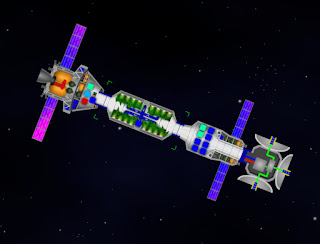 Wealthy oil tycoon and germaphobe, Harold Hawkes, commissioned Centauri Spaceworks to construct a small ship called the Hermit.  Rumor has it that he plans to live out his life in the far reaches of the solar system away from the bacteria and germs on Earth.

To begin the construction of the Hermit, an ATV was launched with supplies including: water, food, and Harold's personal library of books. It was connected to an oxygen garden to supply atmosphere and additional food.  A transponder module was added on for communication.  Finally an Orion Capsule with Harold was launched and connected to the 3 modules already in Earth orbit.

Harold then left orbit, traveling first to KAT, the heading on to JOR where he plans to stay until Earth is free of germs, or his supplies run out, whichever comes first.