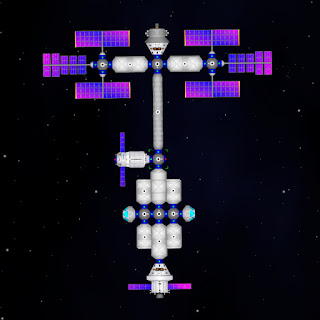 The Palm Tree Hotel was upgraded with an additional docking hub.  This made it possible to resupply the station with consumables even if both the guest and employee Orion modules are docked at the station.

The down side of the extra docking ports it that it partially blocks the view of the guests from the cupola.  Hotel management would like to minimize the amount of time a vehicle is docked at the new ports in order to avoid disruptions to the guest's view.

Update:  A new space pool has also been added. 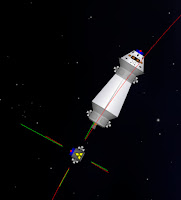 Recording from mission to rescue I.S.A.A.C. crew stranded near ADS after a meteoroid storm.  Commander Regina Simon and Pilot Sam Carvala on board an Orion III.  The launch delivered the Orion III and two explosive modules into orbit in the middle of a debris field.  Their mission was to clear the orbiting debris and then head to ADS to inspect the damage and rescue any survivors if possible.

"Damn", Sam exclaimed as a meteoroid flashed by outside the capsule window.  "That was close!"

"Let's get the explosives deployed and clear out that space debris from our orbit", replied Regina as she unbuckled from the couch and transferred over to orbital piloting station.   She began flipping switches.  Sam took a moment to pull out the photo of his wife and daughter from his suit pocket before taking his post next to Regina at the radar station.

It wasn't long before Regina and Sam heard a small pop and felt a slight push as the first explosive module detached for the Orion III.

"Just in time.  There is one coming up fast behind us." Sam said.  "It should miss, but it will be close"

"Let's zap it before it has a chance to make close", replied Regina.  Outside the window small jets of gas began to emit from the explosive module as Regina nudge the joystick to push it into the path of the on coming debris.

"Two kilometers", Sam said as he began calling out the closing distance between the capsule and the chuck of asteroid.

A brief flash of light was visible outside the window.  "Got it", Sam remarked as the blip disappeared from the radar screen.  "But don't get too excited, there is another one coming up fast from the front".

At 500 meters, Regina pressed the button to undock the explosive module from the tug that it had been mounted on for launch.  The explosive module shot up to a slightly higher orbit.  The tug started to drift back toward the planet.   A second later before the tug could start to disintegrate in the atmosphere, the meteoroid slammed into it, destroying both.

Regina used the thrusters on the explosive module to push it to a higher orbit.  With Sam's help she aligned it with the last rouge meteoroid orbiting the planet.

"That is the last of them", Sam announced.  "Just the FLY station, FLY service module,  and the communications satellite left in orbit."

"I'd like it better if we had a clear orbit", replied Regina.  "But we need to get to ADS pronto.  That is our mission.  The next launch behind us is targeted for the FLY service module rescue."

"Alright, let's go" Sam replied as he moved back to his couch and started to buckle in to prepare for the ejection burn.

There are always parts that are tricky to re-arrange: Voyager-X antenna, MSS sensor module,  solar panels.  Basically, any part that only has a single docking port.  Previously, the only way to re-arrange these parts was to un-dock them and then chase them down before they flew off into deep space.  This consumed fuel and was difficult if the part had any rotation transferred to it from the un-docking procedure.

The CSgtarm is robotic manipulator arm that makes it easier to move parts in space.  It is based on the famous Canadarm.   It allows the operator to move parts that don't have a free docking port to attach to. 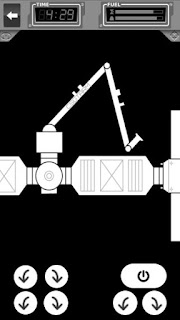 Centauri Spaceworks is currently searching someone, perhaps Nooleus, to construct the CSgtarm from the blueprints above.  The CSgtarm is named after CSgt for his many contributions to the Space Agency wiki.

Centauri Spaceworks has re-established its base on BLU.

The BLU base was originally constructed as part of a trial to establish a multi module colony.  The original trial was a failure.  Despite building on what appeared to be two solid modules for a foundation the base was unsteady.  After several attempts to stop the base from sinking into the planetary surface, the project was abandoned. 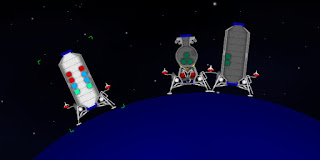 New techniques discovered by the I.S.A.A.C. Organization helped bring new life the the abandon base.  The key discovery was the ability for astronauts to transfer supplies between modules that have been landed on the surface, but not docked together. This allows new supplies to be sent down in a cargo pod with LK Lander legs and transferred to the modules that are already on the surface.

Physics in the Space Agency universe can be a funny thing.  Sometimes you press the rotate button and the ship you are piloting spins faster than something of that mass should.  Other times after several rounds of tapping still leaves the ship spinning slower that a glacier.

One method that pilots at Centauri Spaceworks use for rotating stubborn ships is the double sideways method.  This method can be applied to any ship that has a forward and reverse facing engine unit.

1. Tap the side (left for clockwise, right for counter-clockwise) on the forward facing engine. The ship should start to rotate and drift to the side.
2. Tap the same side button on the reverse facing engine. This should kill the sideways drift but keep the rotation.

You can repeat this process multiple times to spin the ship faster.

If you have only done the procedure once, stop you can probably use the rotation button to stop the ship without having to reverse the double sideways maneuver.

Email ThisBlogThis!Share to TwitterShare to FacebookShare to Pinterest
Labels: Tips

In an effort to shorten transit times to the outer planets, Centauri Spaceworks launched an Orion-E to place a waypoint at the halfway point between GRN and HOM.  By using this waypoint ships departing HOM can travel directly to GRN and no longer need to visit LUN or RED.

Given the coordinates for HOM and GRN, the distance between them should be 1137.  However at the midpoint between GRN and HOM the distance to each was 564 And 562, a total of only 1126.  A distance of less than 1137 should not be possible if the Navicomp points to the center of the planets.

However, flying directly through the waypoint without a course correction is not recommended.  A small error in the initial launch vector means that the spacecraft will miss entering orbit, or crash into the planet.  It is recommend to apply a mid-course correction to align to the Navicomp indicator once it becomes available.

Email ThisBlogThis!Share to TwitterShare to FacebookShare to Pinterest
Labels: Tips

"Abandon Ship" are two words you never want to hear on a space craft.  But if are unfortunate enough to hear them, there will probably be an Orion III capsule nearby to transport you to safety.

The Orion III is one of Centauri  Spaceworks core vehicles for transporting humans.  It is used as both a lifeboat and routine transport vessel for activities near HOM.  It is an Orion Capsule paired with a Heavy Tug, instead of the stock Orion Service Module.

The compact spacecraft size of the Orion III allows it to dock in locations where the traditional Orion service module's solar panels would get in the way.  It also requires a smaller rocket for launch, saving on costs.  Near HOM crew change missions can be done using a Mercury + Delta launch vehicle.  For installation, upgrading to a Titan + Delta II allows the Orion III to arrive at its destination with all or most of its fuel reserves.


A test Orion III capsule was able to make a HOM to LUN to GRN to RED to LUN to HOM circuit and successfully splashdown on HOM.  Based on the usage during this test, the battery charge should last for approximately 25 minutes of game play time.  This allow enough time to travel  to HOM or the nearest station in the event of an emergency.

A medical ship was commissioned to provide aid for space fireworks related injuries.  The Joycelyn E is equipped with four state of the art medical bays and a medical staff adept at re-attaching limbs.

Advances on the Joycelyn E include a new engine, the ALK-638. The ALK-638 is the combination of an ATV and a LK Lander Core. Although a single ALK-638 provides enough power for the Jocelyn E, there are two to insure continuous power in case of emergency. The twin ALK-638s eliminates the need for extensive solar panels to meet the power requirements of the medical bays and control room.

The Joycelyn E is named for Joycelyn Elders, the 15th Surgeon General of the United States.