The 1.9 update of Space Agency introduced a new part type.  Engines powered by electricity instead of fuel.  Centauri Spaceworks immediately began research into building an all electric ship, the Electric Scorpion.  Despite high hopes, this test was solid failure. 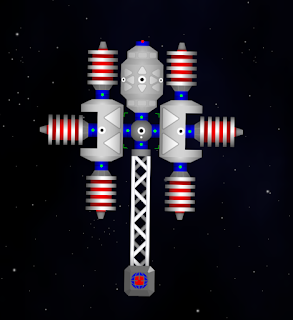 The Electric Scorpion was constructed and tested in the Centauri Spaceworks Workshop.  Left, right, forward and back worked well as expected.  However, the ship was unable to achieve any rotation when firing diagonally opposing engines.  Initially, it was suspected that the cause was the same mechanism that allowed ships like the Hummingbird or the Slug Transport to operate in a straight line was preventing the rotation even though their engines were offset from the center-line.


Without the ability to rotate itself the Electric Scorpion was not very useful as an independent vehicle.  However there was still more testing to do.

The second round of testing involved checking if the Electric Scorpion could be brought to a complete stop.  This would validate the use of ion engines for keeping a station in a fixed location.  Station keeping doesn't require much thrust, just enough to offset the occasional bump from a missed docking attempt.

The ion engines were good at bringing the Electric Scorpion to a near stop.  Unfortunately, they were not able to  precisely cancel out all of the velocity like a burst of RCS thrusters does.  There would be small amount of velocity going forwards, and a burst of the ion engines would result in a very small velocity going backwards.  While the station was visibly stationary, the navi-comp still displayed a red velocity vector indicating that the station may very slowly drift over time.

Linked ion drives are still an exciting technology, however they are not yet able to completely replace chemical fuel engines.