A near fatal error was made during the construction of the Mars Prison Station (MPS).  This mistake left the station running on half power for a week while an emergency construction crew was sent out to remedy the problem and give the station an upgrade.

At 16:03 low power warnings came on and the lights started to go out in many modules of the station.   The backup power supply, which is supposed to kick in the event of a reactor shutdown, failed to switch over.  This left the station in the dark and unable to operate until crew members began shutting off power to individual modules to reduce power consumption.

Luckily the high security prison was designed with failsafe measures in place.  The cell doors remain locked and each cell has its own supply of oxygen in case of emergency.  This prevented any escape attempts while the prison was low on power.

An frantic investigation by the MPS crew determined that the station did not have enough power generation to power all of the prison cells and life support functions.  Normally issues like this are discovered during commissioning when the station functions are checked out before leaving the assembly area. It was quite a surprise for the crew to discover it two weeks after the station was in position and operational.

The root cause was eventually determined to be that the backup batter system was left connected and running on the main power grid while the station was undergoing checkouts for its power generation.  This caused the station to appear to generate more power than it was actually generating.  During the course of the two weeks in operation the battery backup was gradually discharged until it failed.  With the battery backup no longer able to supply the additional power, the station modules began to shut down.

Luckily an emergency construction crew was able to be dispatched.  They added an additional nuclear generator to the station as well as two watch tower.  The station is now back up to full operational capacity. 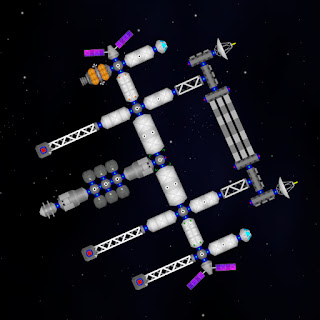 
The Space Crawler series was one of the earliest series of ships constructed by Centauri Spaceworks.  They were designed to support planetary exploration missions.  They were named for the long solar panels on the sides which resembled tank treads.

Space Crawler I was the first design it was limited to carrying Apollo Command Modules because of the proximity of the solar panels to the docking ports.  It also had poor maneuverability and never made it past the flight trials.

Space Crawler II was designed to be carry the larger LK Lander.  It was retrofitted with Voyager X engines to try and solve the poor maneuvering and rotation control.

Centauri Spaceworks has colonized another of the planets: RED.  This is the first of the planetary bases that is able to be resupplied by direct docking. 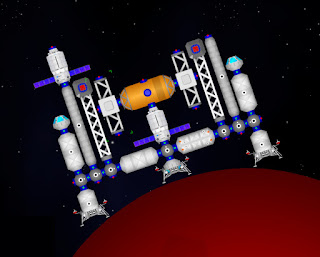 It accomplishes this feet by hovering only inches away from the dusty surface of RED.  Surprisingly the space gremlins that destroy any multi-module vehicle that touches the surface of the planet are very poor jumpers and cannot reach the outpost despite the close clearance.

The Mars Outpost features two docking pads at the top of the structure that allow ATVs to dock and transfer supplies.   Even though resupply is much easier now, it is expected to occur much less often because the outpost is self sufficient.  It has dual nuclear generators to supply power and an oxygen garden to refresh the atmosphere.

The Granite is a large armored vehicle designed for crossing through asteroid belts.  It uses the reactive armor technology pioneered by Centauri Spaceworks to protect the vehicle from stray space rocks. 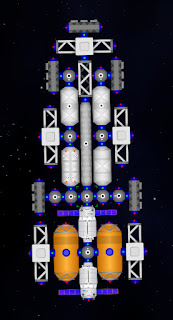 The Granite is an upgrade over the smaller Diorite and uses a command module to control the reactive armor. It has two standard modules, instead of one.  These can be used for transporting supplies or personnel safety through unstable asteroid belts.

The larger vehicle size also allows it to support double front armor.  This allows the vehicle to take multiple impacts from the front.  Previous vehicles were left exposed after a section of the reactive armor was activated.  This extra armor allows the Granite to go further into chaotic asteroid fields and stay in the field longer before having to return to base to be refitted.

The Diorite builds on the ground breaking technology tested by the Flint.  While the Diorite uses the same ADS control system and reactive armor concept, There are several upgrades which allow the Diorite to operate for longer duration that the short range Flint. 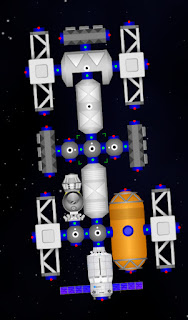 The Diorite includes an oxygen garden to supply the vehicle with fresh atmosphere.  A standard module is also added that can be used to transport cargo, or replaced with a med bay depending on the mission profile.

The interior wasn't the only thing to get an upgrade.  The propulsion system now has a reverse LK Lander Core engine to aid in deceleration for orbital insertion.   The extra hardware and interior space make the Diorite well suited for medium duration missions.

The Flint is the prototype vehicle created to trial the reactive armor concept.  It underwent its first test on January 18th, 2017.  Since then it has undergone several more tests.  It is currently in storage while larger armored vehicles are developed. 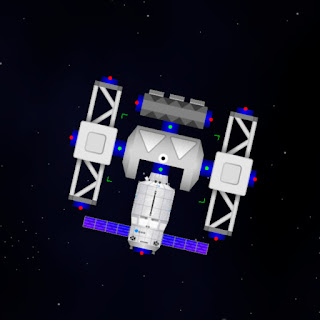 The ADS core module contains all the hardware to detect and react to incoming objects.  The design can also be used as a short range patrol vessel. It needs to be resupplied with O2 and CO2 scrubbers from a nearby ship or station periodically.

The Flint, and all the other ships in the armored series were initially designed using Commander Oz's SVG Station Planning Kit. 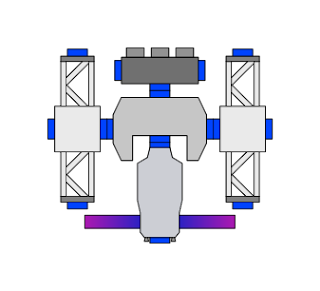 This is the first in a series of posts on a new line of armored vehicles.   The armor on these vehicles provides extra protection from stray meteorites or projectiles in space.

This new innovative technology has many possibilities.  Centauri created a small test prototype ship to validate the concept.  However, they could not explore all the potential alone.   After a successful test Centauri Spaceworks partnered with the Federation Space Command (FSC) to develop additional vehicles using this technology.  The FSC has proven capabilities to design and develop large ships.

The video below shows a test of the reactive armor that was conducted on Jan 18, 2018 with the test vehicle  Flint.


This technology can be applied to may sizes of ships.  Centauri and the FSC are developing vehicles using this concept and will have future posts with more details, including a monster 179 module vehicle developed by the FSC.  Look for more details about these vehicles in future posts by Centauri Spaceworks and the Federation Space Command.

Update:  Several vehicles have been unveiled:  the Flint, Diorite, Granite, and the Mica Schist.