First the main assembly area.  This is where ships get created.  There are pylons on either side of the area to keep the station builder tugs supplied with fuel and power.  Below the assembly area is storage for parts.  The assembly area is pretty messy right now; there is a half assembled station, along with the two LK Lander Cores that were going to be part of something.  There is also a transport of station modules that came from the renovation of Xerces Station.  That still needs to be properly parked in the spare parts section. 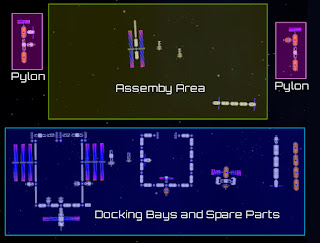 To the right of the assembly area is the parking lot.  This is where ships are parked after they are assembled, or while not in use. You will probably recognize some of the ships from previous posts, like the poorly parked Dragonfly.  Others are parts of previous creations, and perhaps parts of future ships. 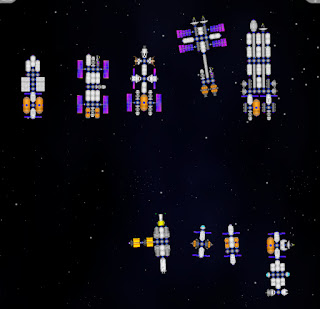