The two pylons of Centauri Spaceworks keep the Station Builder Tugs and other vehicles used in the day to day operations supplied with fuel and power.  They also serve as the boundaries of the construction area, at waypoints CS1 and CS2.   While not very impressive by themselves, these two small stations help Centauri Spaceworks create its large ships and stations.

Email ThisBlogThis!Share to TwitterShare to FacebookShare to Pinterest
Labels: Parts

Centauri Spaceworks has designed two new parts that enable the creation of more varied stations and ships: the 120° hub and the long hub.  Hopefully our part supplier, Nooleus, will manufacture these parts soon.

The 120° hub enables the creation of hexagonal and angled stations.  It has the same dimension as the standard hub.  Instead of four ports at a 90°, it has 3 ports spaced at 120°.  The larger spacing between ports means that it can fit all existing parts without modification.  It consumes 5 power, the same amount as the standard hub.

The long hub provides a way to dock large modules side by side.  Two standard hubs don't quite provide enough separation to dock small modules side by side.  While possible it requires a slight overlap between the modules and docking must be done carefully via the docking auto-alignment glitch.  The second module must be docked at an angle away from the 1st so that the connect before the sides collide.   The process of auto alignment straightens it out, but doesn't do collision detection so the the two small modules end up docked but overlapping slightly.  This also causes them to shoot off wildly or explode when they are undocked.

The long hub it the height (or width depending on how you look at it) of a large station module.  This means that if you connect two long hubs together via port 1 (the port with the white dot), you can dock in two large station modules side by side without any overlap.

The long hub can also be used when a hub is too short, but adding in a standard station module would add too much length.   Due to the extra size, this part consumes 8 power.


Mars Port of Entry is a customs station for the Martian Empire.  It is home base for a fleet of 3 ATV shuttles.  These shuttles are used to perform inspections on ships entering or leaving Martian space.

The ATV shuttles are ready to leave at a moment's notice to intercept any ships that my try to sneak past.  Two Voyager X bodies provide storage for O2 and CO2 scrubbers.  Storing these in the Voyager X bodies keeps them fully charged and ready to be moved to the ATV's prior to launch without having to top them off in the Oxygen Garden before launch.

Two Orion Capsules are docked as escape vehicles. There is also a LK Lander ready for excursions to the surface of RED. 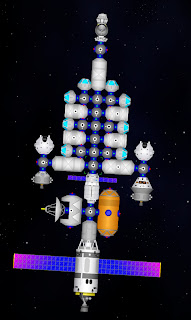 The ship gets its name from the eight cupolas.  These cupolas provide a crystal clear view of the heavens.

Two pods make it easy passengers to take excursions around the nearest planet.

The Crystal Voyager puts safety first with two life boats that can be used in emergencies.  The life boats can be either a crew module or an Orion module depending on the buyer's preference.

The stand-alone laboratory module stocked with batteries provides all the power needed.  The small fuel tank in the lab module is augmented with a larger reserve fuel tank so the Crystal Voyager can take you anywhere in the solar system. 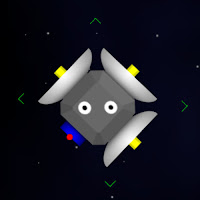 The transponder is a new part in 1.6.0 that helps track ships in space and the vehicles list.  Centauri Spaceworks will be including this its on larger ship designs.

The transponder also stores a longer name that appears in the vehicles list.  The name can be up to 12 characters long to use instead of the typical 3 for a waypoint name.  The one down side is that there is no space key (despite the screenshot from the transponder information page showing a name with spaces).

Unlike the other parts, the transponder is not unlocked after completing missions in campaign mode.  The only way to unlock it is to purchase it.   It is a good purchase to add some new functionality.  Like the other premium features it isn't something you have to purchase to get the experience of the game, but still is useful for players who may run their own aerospace agencies

The down  side of the transponder module is the size.  it is about the width of a large station module or the refuel silo.  This makes it a large for smaller ships, like the Squirt, or stations that only contain a few modules.  Something the size of the crew capsule would have been a better size to fit on smaller ships.

Since the waypoint moves with the module it isn't helpful for stations that should remain in a fixed location.  As part of its daily operations Centauri Spaceworks ships have often, unintentionally given a stations a little bit of momentum as they dock.  With regular way points it is easy to see how far off the mark the station moved and put it back to the original location.  This isn't possible with a transponder way point since it moves with the station.

Given the transponders large size and what it does, Centauri Spaceworks will only be adding it the larger ships it manufactures.  Stations and smaller ships will not be equipped with a transponder.