I am pleased to announce that Centauri Spacework's latest, station, the High Security Station, is now operational.   This general purpose station offers enhanced security and reliable power.  It is the largest station constructed by Centauri Spaceworks to date.  It has a total of 118 modules. 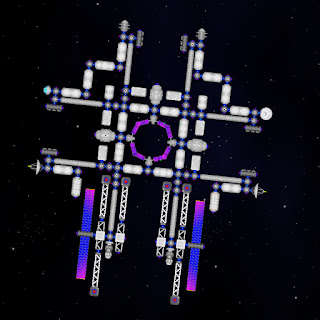 To supply the power needed for the 4 oxygen gardens, medical bay, and other modules, the station relies on six nuclear reactors modules, two large solar panels. and a ring of smaller sensor module solar panels.  The decreased reliance on solar panel means the station no longer has to maintain a large array of panels, which are susceptible to dust and collisions.

The station is named for its three high security docking bays. These bays feature an airlock for atmosphere isolation.  The radiator doors to protect the docking bay port and any ship docked there from space debris, solar radiation, or prying eyes.  Due to the limited size, only smalls vehicles such as an Orion or an ATV can be docked. Larger vehicles will need to use a shuttle to move cargo and personnel between the HSS and the vehicle.

Next up in the schedule of Centauri Spaceworks line of enhanced security stations will be a prison station.

Given the wide spread nature of the misspelling, the board of directors considered simply changing the official name to Centari Spaceworks and leaving the misspelling.  However, this weakened the connection to the stars which the space agency was named after.  The board voted by 9-1 to begin the slow process of correcting the name to the correct spelling of Centauri.

From this day forward Centari Spaceworks will be known by its correctly spelled name, Centauri Spaceworks.


I have done over forty posts about the ships  I have made.  I like sharing my ships, but I also like seeing the ships others make.  I like being inspired by their creativity and designs.  So I decided to try something a little different.  I want to issue a challenge to all the space agencies out there.  A chance to show off your creativity.

And to sweeten the deal, the best ship gets a big trophy.  You can post it on your profile or social media. You can even frame it and hang it up. 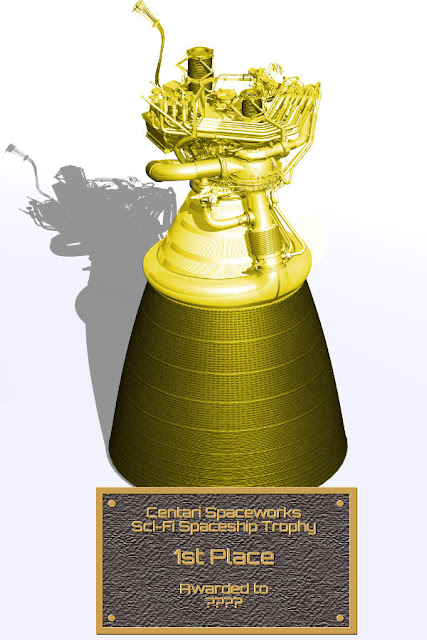 To enter, email the following information to centaurispaceworks@gmail.com :

The entries due by January 19th, at midnight.  One entry per person.  I'll post all the entries to my blog and announce a winner after the contest closes.

Thanks to zombie8259 for giving me the idea for the theme of this contest.  I'm looking forward to seeing lots of great ships.

Update:  The contest has finished and you can see the results.

The new, yet un-named, station is getting closer to commissioning.  All three docking bays have been completed.  The majority of the interior modules have been placed.

The power section is the only major section of the station still under construction.  After several different designs incorporating the CSgt Nuclear Generator were explored, one has been identified that should be able to fully power the station.  The station is currently using two ATVs with batteries in the docking bays to keep it powered while under construction.

In the image below you can see a fresh shift of astronauts in a new Draco Crew Capsule passing through the docking bay doors of a recently completed docking bay.  Docking in the high security docking bay requires a steady hand due to the close clearances. 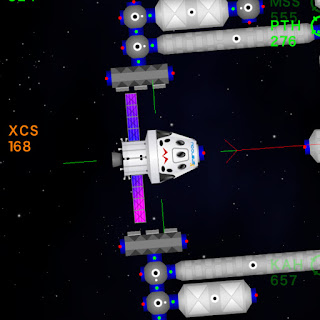 In the past week the stations become the largest object constructed by Centauri Spaceworks at 108 modules.  The total module count at completion is expected to be closer to 120.

The 1.8 update just came out and it is a strong update.  It has new missions and a lot of new parts.

The update adds missions 33 and 34.  Mission 33 has you installing a new CSgt Nuclear Reactor on the MSS.  Mission 34 is sending an ISAAC module and an Orion capsule to the ADS.  It was nice to have Mission 34 work in the chance to use the LP1 from the last update.

The CSgt Nuclear Reactor is a great addition that brings new functionality of permanent power source that isn't a solar panel. No longer do you need to keep stacking up solar panels to power your station (or using to the ATV battery hack).  The reactor generates 200 power, and consumes 6 for a net production of 196.  That is almost double what you could get from a large solar panel and in less space.  It still isn't a small part. It requires an extra long fairing to launch because of the long truss that the reactor is attached to.    It would have been more flexible if it could be split into the tiny reactor and an extra long truss, but it is still a great new part for adding on to stations.

The ISAAC module is basically a round habitation module.  It has one docking port and holds 4 cargo.  The round shape is a nice variation compared to the other mostly rectangular parts.

Both the ISAAC module and CSgt Nuclear Reactor were named after active members of the Space Agency Wiki. It is really great to see them honored like this for their contributions to the community.

The update also includes a plethora of new add on parts with the Nooleus X add-on.  It costs $5.49 USD.  It gets all the Draco and Eagle 8 parts needed to rival SpaceX.


I love seeing the new parts.  This is a must get add-on for any SpaceX fans.


The Eagle 8 is a more powerful version of the reusable LP1 rocket introduced in the last update.  It has the same mechanics.  If you successfully land the 1st stage after a launch you are awarded one quick launch.  Just like the LP1, the Eagle 8 feels a bit more like a balloon instead of rocket when landing.  If you keep the engine on for too long it starts gaining altitude.  You end up tapping the the thruster in short burst to bounce the rocket up and down and get it centered over the landing pad.

The Draco capsules are a nice alternative to the Orion capsule, but leave the Draco Trunk at home and use an Orion Service Module.  The Draco Trunk  has some bugs that limit is usefulness.  Even though it has main engine fuel, it doesn't let you fire main engines.  And if you do get to your destination on the thruster propellant, there is no way to get the cargo out of the trunk.  If those bugs get fixed it will be a great cargo hauler: eleven cargo in one launch!

This is a great update and I am hoping that Nooleus can continue putting out updates like this on a regular basis.

Update Dec 27, 2017 : Nooleus release the 1.8.1 update which included a fix to allow the Draco Crew Capsules' main engines to fire while it was attached to the Draco Trunk.  Unfortunately, it still is limited in its functionality without a way to get to the cargo stored in the trunk. 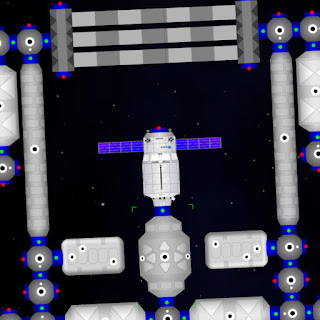 This new station takes advantage of the newer cargo bay, corridor, and airlock modules.  It is on track to consume 800+ power.


The original Xerces Station gotten several upgrades in the past two months.

The biggest change is the replacement of the arms leading to the solar panel arrays.  Previously these arms were formed by two modules and a hub.  These three modules were replaced with a single corridor.  This helps conserve power, as the corridor only requires 5 power, in place of the 45 power used by three previous modules.

This upgrade reduced the clearance between the solar panels and the core of the station.  To compensate, modules were added to extend the core of the station past the solar panels and still allow spacecraft to utilize the docking ports at either end of the core.  Two Apollo CSMs are currently docked at one end of the core serving as life saving ships.  These will eventually be used to return crew members to HOM and replaced with newer Orion IIIs.

Other changes include an airlock module added on the HOM facing docking area to support EVAs and docking with ships that required atmospheric isolation.  A new med bay for medical emergencies was installed in place of one of the old control rooms.