The doors are operated by undocking one of the two hubs on the bottom of the door.  The force of the undocking provides the energy to move the door without requiring thruster propellent.  However the station or ship should have station keeping engines ready because sometimes the impact from open or closing a door can cause the station to shift slightly.


The design of this door allows it to be extended to cover any size opening.   It can be adjusted by adding or removing trusses.

Xerces Station is the largest object, station or ship, constructed by Centauri Spaceworks. It has two control rooms , five oxygen gardens , and the ability to dock multiple ships, including the Shuttle.

It as undergone a series of upgrades since it was first constructed. 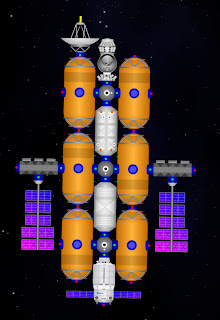 The Big Gulp is a bigger and better fuel tanker ship.  It has 6 fuel tanks , four more than compared to the Little Gulp.

The Big Gulp is equipped for long range voyages to refuel the most remote stations or ship.  It has an Oxygen Garden to keep the crew supplied with air.  The solar panels provide enough power for the ship (with the exception of the fuel tanks).

It handles remarkably well for a large ship.  The ATV at the rear provides great rotational power.  The LK Lander Core at the front aids with deceleration and can be used in combination with the ATV to make lateral movements.


Today, Centauri Spaceworks released two new ship designs, the Little Gulp, and the Pufferfish.
Both new ships are based on the AX2 platform that uses two ATV vehicles docked to a hub .  A cupola is added for a cockpit and control area on one of the ATV  This base configuration allows easy acceleration and deceleration of the ship.  Cargo modules can be connected to the two other ports of the hub.

In the Little Gulp configuration, two fuel tanks are attached giving the vehicle a very long range and the ability to refuel other vehicles.  The Pufferfish is designed for transporting O2 and CO2 scrubbers.  The Voyager X bodies allow the cargo to be transported without being used by the crew of the Pufferfish.

Centauri Spaceworks is also investigating other variations to support transporting people instead of fuel or supplies. 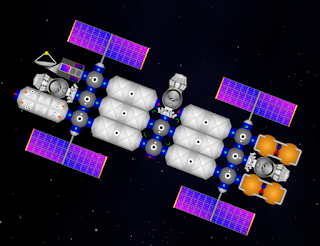 The Sea Turtle is a 2nd generation large cargo ship produced by Centauri Spaceworks.  It can carry 48 units of cargo.  It also has space for 15 units of supplies for the crew (O2 tank, C02 scrubbers and batteries). 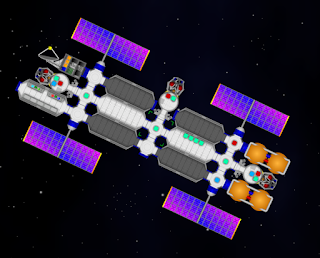 The Sea Turtle was build using parts from the decommissioned Squidward.  Unlike the Squidward, it has good lateral mobility thanks to the  engine that is positioned in the between the two cargo holds.

The 4 solar panels provide enough power to run the control room, 3 engine rooms, and a connecting passage. The solar panels can be left open while firing the engines. This is an advantage over the the 1st generation cargo ship. 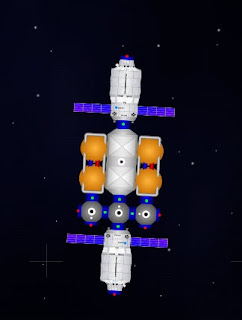 The Squirt is a small cargo ship that is good for carrying water or batteries.  It is based on an earlier design, The Starfish, which had only one hub.  It has a capacity of 24 units of cargo for short trips.  However it typically only carries 20 units of cargo and uses the other space for additional  life support.

The engines on the ATV face opposite directions enabling The Squirt to accelerate and decelerate without having to rotate.  It has very good control forward and back, but moving side to side introduces rotation.  This is manageable because the docking ports are located on the front and back limiting the need for side to side motion.

One ATV can also be detached and used as a shuttle to transport cargo to stations.  This eliminates the possibility of The Squirt's momentum bumping the station out of position when docking.

After construction, The Squirt was quickly put into service delivering water to several stations where the Oxygen gardens were beginning to turn brown from a drought.