The Problem with the LOK and Draco Trunk

In Space Agency you can only access one part of a vehicle, even if the vehicle is built up out of multiple parts.  Normally this isn't a problem for most vehicles, like the Orion, because the cargo is stored in the first part, not the second.  The service module just expands the fuel capacity and adds a main engine.  However, the LOK crew module and the Draco trunk are exceptions.  Both of these cargo carrying parts are used in multi-part vehicles,  and are typically not the top vehicle.  This means that their cargo area can't have items removed from it.  This makes the Draco trunk useless as a way to transport additional cargo, and the LOK will always have a limited atmosphere supply.

As a fix to this Centauri Spaceworks interface designers propose making the cargo panel scroll-able and adding in additional sections for each part that can contain cargo.  This would allow access to the Draco trunk and the LOK crew module.

The images below illustrate a potential solution.  The LOK modules only have three cargo slots but the images show eight to validate that this interface could handle any sized module.  The first image shows the first module in the vehicle.  You can see that there is an additional section below.  There up and down arrows that can be tapped or dragged to move between the sections. 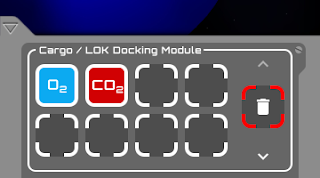 The second image shows the cargo view of a subsequent module.  The initial module's cargo segment has been scrolled up. 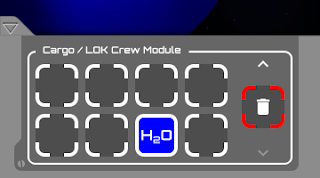 All of the pilots and engineers at Centauri Spaceworks hope that Nooleus will implement this solution, or some solution to the problems with the LOK and Draco trunk in the next update.

Update:  The original post proposed scrolling left and right, but was later updated to scroll up and down.


The Centauri Spaceworks sandbox is starting to getting laggy so it is time to do a house cleaning before building any more creations.  Instead of just deleting stations and ships, I wanted to take this opportunity to share the sandbox with all the other Space Agency players.  However this is a pretty awesome sandbox so I felt there needed to be a challenge involved.  Check out the sandbox contents below if you have doubts about its fabulous nature.

The challenge is pretty simple.  I love seeing what other people are doing in the game.  To get a copy of the sandbox, all you need to do is show what you are doing in Space Agency.  You can do this in either of two ways:


Base on BLU including orbiting supply station

Base on PUR including orbiting supply station

Centauri Spaceworks Research Department recently did some launches to evaluate some of the most powerful rockets in Space Agency:

All three were tested with a heavy payload of a Habitation Module, and two Hubs (plus enough fairings and tugs glue them together). 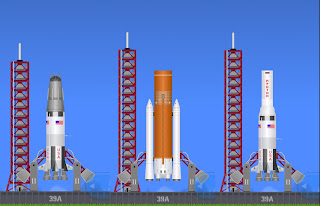 To keep the first round of testing consistent all rockets were kept at full throttle until the fuel ran out.  It may be possible to get better results by shutting down the engines for parts of the launch.

The Saturn V + N1 B was then only rocket to achieve orbit from the first round of testing.  It just barely made orbit with fuel running out slightly before obit.  The SLS + boosters did the second best. It ran out of fuel in the upper atmosphere.  The Saturn V + Proton did the worst of the three rockets.  The Proton did not have enough power to lift the payload and stalled.  It burned up all of its fuel without adding any significant altitude. 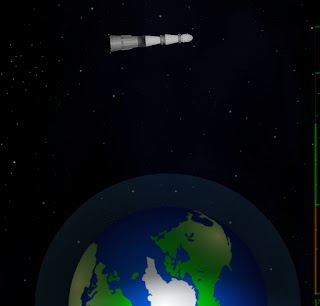 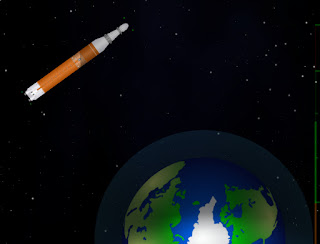 In all of these tests, the goal was only to get the payload to orbit.  To reduce weight, the payload was typically mounted directly to the rocket instead of an intermediate tug.  This limits the ability to deliver the payload outside of HOM orbit.  However, most of Centauri's launches require the payload be delivered to the workshop assembly area, which is 170 units from HOM.  Further research will be needed to determine if adding an additional tug to enable extra-orbit delivery will impact the results.

Centauri Spaceworks in collaboration with York Space Agency has developed another part:  the Little Gripper.  The Little Gripper solves the problem of attaching parts that don't have a docking port, like the communication satellite.  It has two ways it can work. 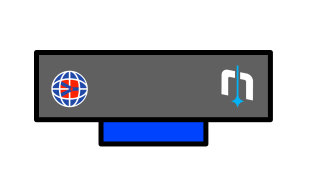 The Little Gripper can be built as part of a rocket where it stacks docking port side up.  This way anything you can attach a small stage to can be attached to a space station.  This works similar to how you can dock a small stage with a crew capsule on top.

For example if you want to have a Soyuz second stage power your space ship, you can add a Little Gripper to the top of it instead of a crew capsule.

In this mode the Little Gripper can transfer power and fuel to the rocket.  These connections can get hooked up while vehicle is still on the ground.  It can't transfer atmosphere.

The limitation with this mode is that it doesn't support fuel, air, or power connections.  It just hold the part in place and allows cargo to be transferred. 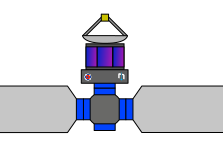 Large solar panels are great from producing a lot of power, but they also take up a lot of space.  This results in the panel potentially blocking several adjacent docking ports.  Alrik Fons and the Part Development Group at Centauri Spaceworks have created a solar panel which solves this problem.

The half solar panel produces 50 power and consumes 2 power giving it a net output of 48 power.  This makes it the least powerful dedicated solar panel (excluding the MSS Sensor module which also is a pressurized module).

The advantage of the half solar panel is that it has three docking ports, more than any other solar panel.  These allow it to be attached in a variety of configurations.  It can be positioned to open directly out from the attached docking port like the MSS Solar panel (but has a much smaller clearance when retracted).

It can also be positioned to open perpendicular to the attached docking port.  This leaves one side of the half solar panel still clear and available for other modules to be attached.  No other solar panel has this capability.

The Mica Schist is an armored transport carrier for other small vehicles, like the ATV or Orion.  It can carry up to four of these vehicles in a protected cargo bay.

Like the other vehicles in the armored vehicle series the Mica Schist is protected against projectiles like stray meteorites by a series of reactive armor panels which can be detached to protect the vehicle in the event of an impending impact.

The Mica Schist features two layers of docking bay doors to protect the vehicles it is transporting.  It also has two fuel silos so it can serve as a refueling station for any of the small vehicles that dock in its docking bay.  The large size of the the Mica Schist requires it to be powered by a Proton rocket for the main engine.

The Mica Schist supports two oxygen gardens for faster refilling of docked ship's air supplies.   It is also outfitted with a med bay in case of emergencies. 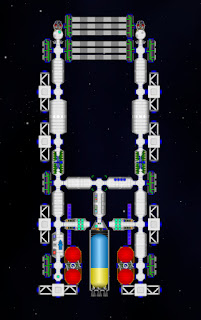 Alrick Fons and the part development group at Centauri Spaceworks have created another part to recommend be developed by Nooleus: the fuel conversion plant.   The inclusion of this part could reduce the number of launches needed to keep the Centauri Spaceworks workshop supplied with thruster propellant.  It is similar in concept to the fuel cell part proposed back in August 2017.  Unlike the fuel cell part, the fuel conversion plant takes extra main engine fuel and converts it into thruster propellant (or vice versa). 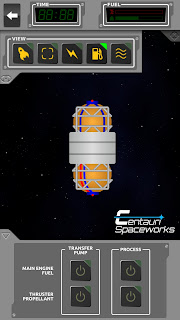 While amazing and a big resource saver, this process is intense and time consuming.  The conversion plant consumes 200 power when processing fuel.  It also takes 5 minutes for it to convert one tank of main engine fuel to thruster propellant.  To run this process (and store the fuel), the conversion plant requires a significant amount of equipment.  This makes it one of the biggest and heaviest modules in the game, along with the large fuel silo.